However, this story starts over a month ago. But more accurately, it has been at least 8 years in the making.

I have been an ultra runner since 2003 when I ran my first 50k. An ultra in the running world is any distance longer than a marathon, which is 26.2 miles. I had been running marathons for a couple years and wanted another challenge, and I figured a 50k was ‘only 5 more miles’, so it seemed doable. Jump ahead to 2009 when I start CrossFit and my first coach had a rowing background and encouraged the members to participate in Erg Sprints. Naturally I gravitated towards the longer distance – 30 minute row – which I completed in 2010 (7101m), 2001 (6977m), and one last time in 2018 (7152m).

It was last year that I first heard about the half marathon, and full marathon, option. As someone who has completed seven 100 mile trail runs and ten 50 milers, my first thought was ‘that’s crazy!’. I’ve put my body and mind through immense stress for 32+ hours, and I was intimidated by something that was less than 4 hours.

Yet, come December, I was intrigued by both distances. I’d spent most of 2018 power lifting, but really wanted to participate in Erg Sprints. I started to pick up my rowing a bit that month, cherry picking workouts from the Concept2 website, as well as doing some a former Old Cityzen had given me. The last day to register before the first price increase was December 31st, so I finally bit the bullet and put my money down for the half marathon row.

I also put down a goal time to finish under 90 minutes.

Not only did I have to double my time on the erg, I would have to improve my pace by nearly 3 seconds to reach my goal time.

Down the rabbit hole of the interwebs I went, searching ‘half marathon row training programs’ only to find there weren’t many! I copied as many tips and hints I could find, and modified the *one* training program I did find to hopefully help me reach my sub 90 min goal in just under 5 weeks.

Here are the workouts I completed

Frustration hit during the workout on 1/25, when I couldn’t hold a pace I had expected. Everything up until that point had felt good. My workout two days before – a repeat of my first real training workout for this event – felt awesome, and now it seemed like progress was moving backwards. Even my workout the next day was filled with frustration and doubt – was I ready? was I peaking too soon? was I training too hard? was it all in my head?

I filled the week before the event, taper week, with an easy 30 min row, interval repeats, and a couple timed pieces to work on pacing. Those felt great and I knew I was in good shape. My confidence was on the rise.

Race Day
I had done my homework many times over – knowing what pace I needed to hold to break 90 minutes, and also looking up the names of the other competitors to see if they had done the half last year and their times. It was something to store in my back pocket, but I had to remember the event was about meeting my own personal time goal.

Morning was a bit chaotic as check in starts at 7am and my event started at 7:30am. There was already a long line when I arrived right at 7am. Knowing most events started at 8am or later, I cut to the front of the line. And it wasn’t until I asked a volunteer in the warm up room where to go since there was no information given to the half and full marathon rowers telling us that we warmed up on the competition floor. I’m glad I asked because there was another marathon rower in the room. We made our way to the gymnasium and I started to settle my mind.

I went through my normal warm up routine starting with the “pick drill” and some 500m repeats to work on my stroke rate and pacing. After a short briefing, I got my music going, and we were off!

I jumped out to an early start as planned. Get in a good first 250 meters then settle in.

And for the next 90 minutes, I stared at this screen.. 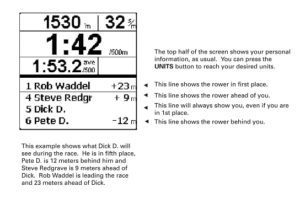 My name hovered below the thin black line for quite awhile. I was within 15-25m of the leader (above the line) then fell back a bit, dropping down to 2nd below the line. I maintained my pace and stroke rating (24), which was a bit elevated due to the hype of the event. Granted, there’s not a lot of cheering going on or attention being paid to the half and full marathon rowers, but it’s seeing my name on a screen that gets me going. It’s the atmosphere, the music, and the culmination of my training that gets me hyped up.

Having done ultra running events, I used that experience to deal with this first portion of the race. The most I had rowed in training was 1:10 for 16,500m. When training for marathons, the most people do is around 20 miles as their last long run. I figured I’ve done enough 20-30 min rows and interval work, that my body will know what to do once I get beyond 1:10. But in running, that point of the race is usually called ‘hitting the wall’. With experience running 50 and 100 mile races, I knew I had the mental training to deal with the pain I might be feeling physically.

And early on, physically I was feeling good.

With the monitors counting down from 21,097, this was new territory for me. When we got to the 16,000m mark, and then 10,000, the numbers started to look a little more familiar. It seemed as though that was familiar territory for other people as well, as you could see paces picking up on the screen as well as on the ergs to your left and right. They weren’t my nearest competition as I kept peeking over at their screens to keep an eye on their pace and meter count, and I had a decent lead.

And then I was leading overall.

The top rowers lead dwindled and then she was off the screen. I don’t know where in the flight of ergs she was located, but I didn’t see anyone get up and leave. It was quite the mystery. Needless to say, I was now in unfamiliar – yet exciting! – territory. So I did want I did in training – I counted my strokes.

I was holding 25 SPM (strokes per minute), and would close my eyes and count to 25, then open them to see another 250m had gone by. When running ultras, I would drink based on the length of a song or just my speed based on how many songs it would take me to get to the next trail marker. In both cases it was tedious, but it worked.

And for the next 9,000m, I counted to 25, and then I did it again.. and again.. and again. Sometimes I did it with my eyes closed and I would row off of “feel”. Most times I kept my eyes open to keep an eye on that thin black line my names was above.

When I got to 6,000m remaining I was in more familiar territory. But it was also the same distance in the workout 8 days before the event that had me worried. I had a moment where I found my ‘zen place’. It’s something I (usually jokingly) do to center myself before dealing with something that scares me. Typically that involves dealing with large crowds at Costco or Target. However, today it was about acknowledging the previous workout and how I reacted poorly to the outcome. The outcome happened for a reason, and it brought me to the point. I was able to learn from the experience, and I was in a better place – mentally and physically.

And so I rowed on.

But a close finish it was! I finally relaxed a little with 500m remaining, knowing that I would break 90 minutes and win the event.

To say I was happy about my final time and placing would be an understatement. I set a goal. I worked towards that goal. I accomplished my goal. I was ecstatic. 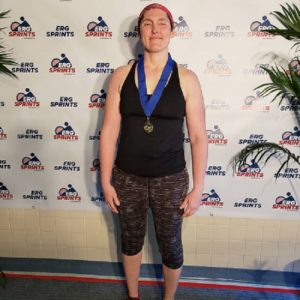 And now it’s on to bigger goals.

After the event, I stayed and watched the marathon rowers finish – still rowing 90+ minutes after I had finished. It was truly a sight to behold. Ever more rewarding was the chance to talk with the lone female marathon rower, who also did the event in 2018. I picked her brain about when she started training for the event, how many times per week she rowed, what her longest row was, if she did any yoga or cross training, etc.

It’s easy to start thinking about ‘next time’ immediately after a competition and things you would do differently. I was happy with my training, the ups and downs of it over the course of 32 days from sign up to race day. I know the full marathon row – 42,195m – is within my capabilities, mentally and physically.

There are powerlifting meets, maybe a CrossFit competition, and a road as well as a trail running race or two I’d like to do throughout the year.

I’ll have more than 32 days to train for each event.

Set a goal
Work towards that goal
Accomplish that goal

Onto that next event.