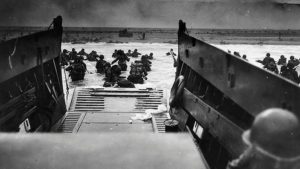 **The Normandy landings were the landing operations on Tuesday, 6 June 1944 (termed D-Day) of the Allied invasion of Normandy in Operation Overlord during World War II. The largest seaborne invasion in history, the operation began the liberation of German-occupied northwestern Europe from Nazi control, and contributed to the Allied victory on the Western Front. Operation Overlord ended on August 25, 1944, when Paris was liberated.

The operation started with air landings and a massive amphibious attack in the early morning of June 6th. After the landing, the first attempt was made to maintain and expand the Normandy bridgehead. Various operations were undertaken for this, and during Operation Cobra the Allies finally broke through the German lines. When the Germans collapsed with Falaise, the battle in Allied was definitely a benefit. The road to Paris was opened and the French capital on the Seine was taken.